It’s been 25 years since astronomical data was reported that threw the Big Bang theory into turmoil. To patch up the standard model of the universe, astrophysicists were forced to introduce dark matter and dark energy as completely unknown, undetectable substances that dominate the dynamics of the universe. All of the stars and galaxies, the gas and dust and plasma, the quasars and black holes—everything that we see is just going along for the ride, 5% of the gravitating matter that dominates the universe’s evolution. Even for scientists who have devoted their careers to developing Big Bang theory, this is an uncomfortable situation.

But 25 years before that, there was already a scientific gadfly with impeccable credentials who was warning that there were anomalies in the sky, observations that could not be squared with the assumptions that everyone was taking as foundational. This was Halton Arp. In 1966 he published his Atlas of Peculiar Galaxies. By 1978, he had established a connection that couldn’t be ignored between quasars (which are supposed to be the most distant objects in the universe, billions of light years away from us) and Seyfert galaxies, a class of ordinary galaxies that are supposed to be at least ten times closer to us.

In 1982, he showed that in almost all cases where a large galaxy had smaller companions, the smaller companion galaxies had higher redshift than the central galaxy. (If redshift comes only from velocity, why should all these companion galaxies be ejected in a direction that happened to be away from planet earth?) In 1984, the astronomy establishment shot the messenger. Arp was relieved of his post as director of Caltech’s Palomar Observatory, where Arp had been taking the pictures that showed the cosmology theorists that they had some explaining to do.

Arp then had to compete for telescope time with more mainstream projects; but until the end of his life (2013), he continued to collect thousands of cases of quasars that are not only close to galaxies in the sky but sometimes are (apparently?) connected to those galaxies by plumes of plasma. If a few quasars line up so they happen to appear in the same part of the sky as a nearby galaxy, that might be a coincidence. But with thousands of examples, it just didn’t make sense that these are all accidental alignments. 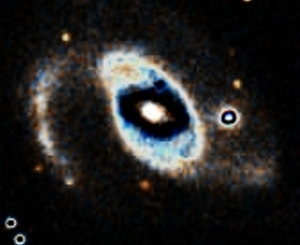 This is a radical challenge to a paradigm that has become entrenched over the last sixty years. How might we understand these anomalies? Arp is very clear that his primary message is observational: we need a new story. He offers one such story, but encourages others to make creative proposals; we shouldn’t confine ourselves either to the traditional story (redshift = distance) or to Arp’s suggested alternative.

Arp’s story begins with Ernst Mach, who put forward the idea in the 19th century that matter only obtains its mass in relation to other matter in the universe. Einstein cited Mach’s Principle as inspiration for his General Theory of Relativity.

Arp proposed that matter is continually being created, but with zero mass, which grows as the new matter “becomes aware” of surrounding matter in the universe. There is not one Big Bang but many Little Bangs. Astronomers know of many “active galaxies” with black holes at the center that are spewing out matter. [Personal connection: my 1987 dissertation was about jets that emerge from black holes at the center of galaxies.] Conventionally, these jets are interpreted as matter that is sucked into a spinning black hole by gravity and some matter that doesn’t make it all the way in is shot out through the north and south poles. But in Arp’s interpretation, these are actually “white holes” and the jets are newly-created matter. A white hole is just a time-reversed version of a black hole, with matter coming out instead of falling in. There is nothing unphysical about a white hole.

In Arp’s world, a quasar is newly-created matter. It moves very fast because it has almost no mass, but gradually it slows down (conservation of momentum) as it gains in mass. So why do quasars have high redshifts? It is not because they are particularly far away, and not because they are moving away from us. Rather, it is because their electrons are new, and have not communicated with the whole universe yet. We just said that according to Mach, matter acquires its heft by relating to the rest of the universe. When electrons are new, they are not yet in touch with very much of the universe because of the finite speed of light. As the electrons become aware of more and more of the universe, they become heavier and heavier.

A (hypothetical) lighter electron produces just the same spectral lines as a redshift due to velocity.

Another thing Arp noticed was that redshifts of quasars were not continuously distributed, but tended to cluster around preferred values. He interpreted this as coming from the fact that a star first “notices” the nearest star, then the nearest cluster of stars, then its whole galaxy, then more and more galaxies. Each time that a new heavy object comes within a star’s horizon, the redshift of that star steps up; then the redshift stays at that value until the next mass structure comes within its horizon.

So, according to Arp’s model, the quasars are not fantastically bright and very far away; they are moderately bright and at the same distance as the galaxy that ejected them, and their redshift gets an extra boost from the facts that electrons are lighter when they are created, and gradually get heavier.

Quasars mature into galaxies over time. Our own galaxy presumably had its birth in one such event, and the mass of the electron that we observe in our local region of the universe reflects the age of our own galaxy. As we look further and further out into space, we see galaxies at an earlier and earlier time, because of the finite speed of light. So the galaxies we see tend to be younger, hence their electron mass is less than ours, hence they tend to be more redshifted the further we look back in time. This is Arp’s story, and I’m not sure it holds together. It seems not to be consistent with Fred Hoyle’s Steady State universe of the 1950s, because in Hoyle’s universe, looking back in time, the galaxies are not, on average, younger. That’s the meaning of “steady state”.

The Hubble expansion is taken as the foundation of modern astronomy, and Arp gives us reason to question whether the universe is expanding at all. If some of the redshift is due to “the age of the electrons” in a region of the sky, why not all of it?

The idea of matter being created might seem radical, overthrowing the principle of Conservation of Mass and Energy which is as old as Newton and as solid as Einstein. But in fact the Big Bang needs the concept that mass/energy can emerge from a white hole. The difference between the Big Bang and Arp’s theory of white holes at the center of galaxies is just the difference between one big event and many smaller events. The physics is the same.

Because of Arp’s credentials, his pedigree, the excellence of his observations and the rigor of his analysis, he could not be completely dismissed. But make no bones about it — astrophysicists hated his ideas. The main reason for this was probably conservatism. If you accept Arp’s thesis, you have to go back to the drawing board in conceiving the universe. And at the time Arp was writing, the Big Bang was the best game in town, providing challenges and intellectual stimulus (and research grants) to two generations of astrophysicists.

There were many studies commissioned to “debunk” Arp’s statistical claim that these associations between high-redshift and low-redshift objects occurred much more often than chance could account for. As I have noted in another context, the easiest way to stack the deck in a statistical study is to dilute the evidence, or use a less sensitive test, or simply be sloppy in the data collection. It is easy to make a real effect look “not significant”, and much harder to make a chance occurrence appear to have a strikingly low p value. This article from the era of Arp’s notoriety seems to be a case in point. Another contemporary article in Astrophysical Journal, argues that the associations Arp identified were much less improbable than he claimed. The author dismisses several of Arp’s findings, each for a different reason. He then apologizes, “Dismissing the significance of quasar-galaxy associations on a case-by-case basis in this way has the appearance of a strained effort to defend the paradigm of cosmological redshifts. It is tempting to feel that, while a few of these associations can be explained away, surely they cannot all be dismissed…” Other astronomers [one, two] did their best to dilute Arp’s statistics and concluded that, even though Arp may have exaggerated just how improbable his examples were, they are still improbable enough to require explanation.

We are in an age when the Big Bang can be questioned, and there are more of us willing to throw it out, if that’s what it takes. The discovery of the cosmic microwave background in 1965 was the turning point at which the Big Bang became the only game in town. Let’s revisit the reasoning: Based on the nuclear reactions that we might expect to take place, Herman Alpher [1948] traced the fact that the universe is roughly ¼ helium and ¾ hydrogen to the first 3 minutes after the Bang. He predicted that, to make this work, the Bang must have been “hot” and that leftover heat from the Bang should be visible today as diffuse microwave radiation. When that microwave radiation was discovered 17 years later, the Big Bang got a Big Boost.

By the end of the 20th Century, we were able to refine Alpher’s calculation, based on the microwave background, the average matter density, and the rate of the Hubble expansion, all of which were much better known after 30 more years of measurements and observations. The calculation no longer worked. The agreement — which had seemed so magical that it turned the whole astronomy community into believers — the agreement evaporated in 1998. Dark Matter and Dark Energy were invented to rescue the Big Bang, but everyone recognized that these were ungainly patches on a theory that had been elegant and simple.

There were many great astronomers in the second half of the 20th century. Except for one, all of them began with theories and devised ingenious ways to test them through observations. Halton Arp started from observations and began modestly, tentatively to build hypotheses. Maybe the time is ripe for revisiting the ideas of Arp and Fred Hoyle, to see if they can be combined in a way that is consistent with the anomalous observations that plague the Big Bang:

Lest we be hypercritical, remember that the reason there are so many anomalies is that the Big Bang has been an inspiration guiding astronomy research for 60 years. No other alternative theory has been subject to rigorous testing.

We have plenty of work to do.